It’s time now for us to exchange the concrete jungle of Johannesburg for the bush veld  (“fields” in Afrikaans) of Botswana. Specifically our destination is the Mashatu Game Reserve located at the intersection of national reserves in Botswana, Zimbabwe and South Africa.

The three countries share unfenced borders at this juncture allowing animals free access to the entire area. They also share responsibility for the entire area, with Mashatu making up 40 percent of the total. I’m quite excited about getting out of the city and moving on to this next adventure. Johannesburg offered up so many great surprises but I can’t wait to see what comes next! First though, we have to get there.

The journey to Mashatu is itself a bit of an adventure. First, we fly from Jo’burg to “Polokwane”, a city meaning “place of safety” located in the northern part of South Africa. It is the country’s largest urban centre north of Jo’burg but basically it’s in the middle of nowhere, surrounded by veld, farms and mining interests.

In Polokwane we are met by Alan who will transfer us by car two hours north to the Botswana border where we will then pass through customs and be met by a Mashatu guide for our journey onward to the MashatuTented Camp, our home for the next four nights.

Border control at Pont Drift in the Limpopo Valley between South Africa/Botswana is painless. It’s a quiet day and we are the only people passing through. We’re also lucky because the border between the two countries lies on a river but the river is currently dry. When the river is full it’s impossible to drive across the border so you have to climb into a basket-like contraption that then pulls you and your luggage above the river and across the border! Now that would be an experience!  The guards are used to safari tourists so our passports are quickly stamped and processed.  Our luggage is then transferred to our Mashatu guide, Rogers, in his safari jeep. We bid ‘adieu’ to Alan and then off we go!

The Mashatu Tented Camp is an intimate set up of eight luxury tents approximately an hour north of the Botswana border and about 20-minutes from the Mashatu Main Lodge. Because it’s low season there are currently only two other couples at the Camp. Our tent comes complete with doors, a luxurious king-sized bed, a very private out-door en-suite, fans and a front deck overlooking the game reserve. This is what I call camping in-style!

Exploring the rest of the Camp will have to wait however as we arrive just in time to head out for the afternoon game drive.  Game drives are undertaken twice daily here: once around dawn (wake-up is at 5am for departure at 5:30!) and then again later in the day (high tea – yes, “high” tea – at 3:30pm with departure at 4:00pm). My personal favourites are the morning drives. I love to watch the sun come up and the animals generally seem more active, plus they’re easier to see. The cats are coming home from a night of hunting while the elephants, giraffes and other animals are having breakfast, bathing and getting ready to face the day. However, regardless of the time of day, it feels great to be away from the city and out in the African landscape.   Although we’ve done a number of safaris previously in Kenya and Tanzania, the landscape at Mashatu is different. This is the rainy season for the area and, while it’s been drier than normal, there are still more flowers and green bush than we were expecting. Many of the fields are blanketed in small yellow flowers called “Devil’s Thorn” because of the thorn the flowers leave behind once they die. Vegetarians like elephants, giraffes, baboons and zebras to name a few are draw to these fields like kids to candy.  The large dark green Mashatu trees that give the reserve its name, dot the landscape and offer refuge from the heat.  Some of these trees are well over 300 years old!

There are a few rivers running through the Mashatu Reserve and these too, are currently fuller than at other times of the year. The additional vegetation and water resources could make it somewhat more difficult for us to spot animals: they have more vegetation in which to hide and they have more choices of places to stop to eat, drink and bathe. On the other hand, we also have the opportunity to find animals immersed in yellow flowers or frolicking in a river. The photographic opportunities seem endless! As our good travel karma would have it, over seven game drives we are fortunate to experience a large number of close-range encounters with all sorts of wildlife. I give credit primarily to our guide, Richard, and our “spotter”, Morris for our success. Together their over 40 years of combined gaming experience plus a huge stock of patience and their understanding of animal behaviour allowed us to get close to the wildlife and to see things we might not have otherwise.

Here are some of the highlights from our game drives: 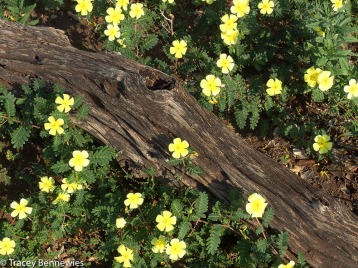 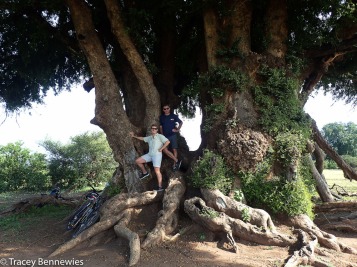 Under a Mashatu tree that is probably 800+ years old 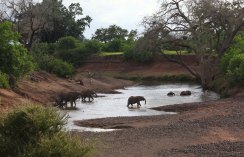 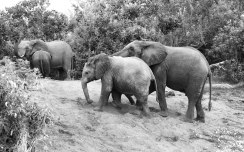 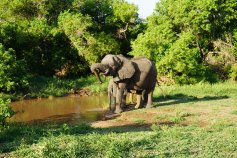 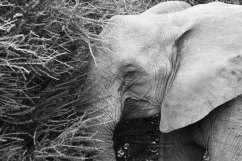 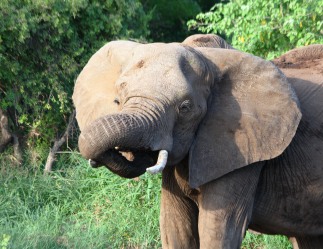 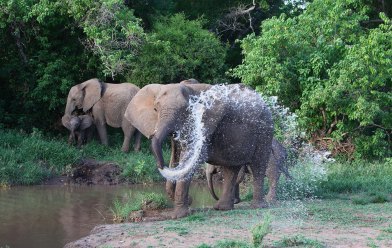 Back at the camp our time was filled with eating delicious home cooking, listening to fascinating stories being told by our guides, swimming in the pool, drinking good wine and guarding our belongings from the naughty monkeys.

I find it difficult to capture the magic of the safari experience in words so I will let a few more of my photos offer you a glimpse of what a diverse and an amazing experience going on safari can be, particularly at a tented camp like Mashatu Tented Camp. 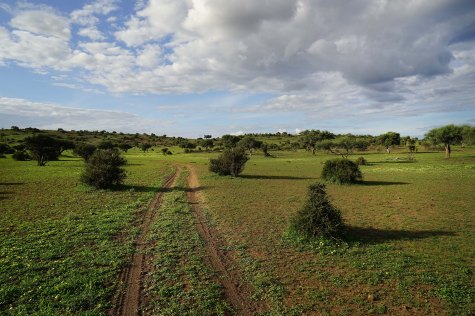 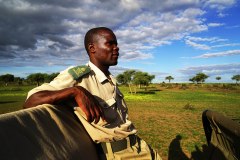 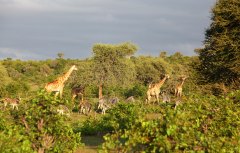 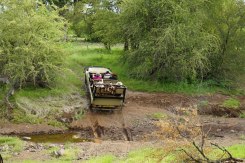 Driving is not a picnic here 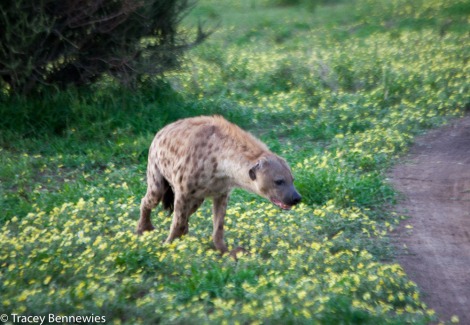 This poor old female hyena has one gimpy leg from a battle in her youth. She can still hunt though!

This is how close one jeep got to the leopards. There were only 2 jeeps here.

Mrs Warthog and her babies

Baby jackals left on their own are curious about us

It’s a good place to sit and think.