Today Linda (pronounced “Leendah”) my guide and I will be going to extremes. First we’re driving about an hour north of Jo’burg to the World Heritage Site ‘Cradle of Humankind’ where I’ll visit Sterkfontein Caves. These caves are home to some of the oldest known hominid fossils ever found – some exceeding 3 million years. We’ll then return to Jo’burg for the afternoon where I’ve scheduled a walking tour with a local artist to explore the street art culture, something Jo’burg has become increasingly known for over the last five years. Archaeology and Art – history and the present – sure to be an interesting combination.

The drive to the Cradle of Humankind is through lush rolling hills. A World Heritage Site since 1999 it covers 180 square miles.The Sterkfontein valley consists of around 40 different fossil sites, only 13 of which have been excavated.  The Sterkfontein Caves lie within this area and are owned by the University of Witwatersrand in Jo’burg. Sterkfontein is a limestone cave system and it’s huge – over 160km in length. It was discovered in the late 1890s, when miners were dynamiting in the area, searching for limestone which they would then convert into quick lime, an element needed for the processing of gold and the manufacture of cement. During their blasting of the limestone the miners displaced the sediment and revealed entrances to the caves.

Although there is still much this cave to be explored it has already produced more than a third of early hominid fossils ever found prior to 2010. 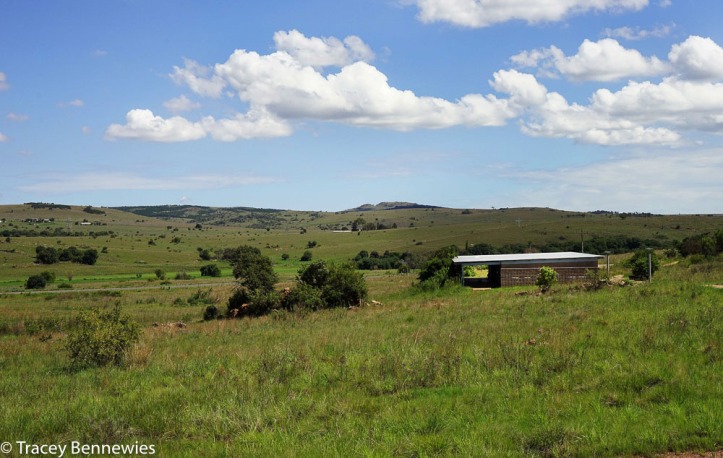 Set within rugged limestone hills the cave site includes a museum as well as a discovery centre (mostly for school children). The main attractions however are two particular sets of bones from early humans. The first, an  Australopithecus skull (early hominid) is named “Mrs Ples” and dates back about 2.3 million years while the second, known as “Little Foot”, includes an almost complete Australopithecus skeleton dating back more than 3 million years and perhaps even 4 million years! Excavations continue and archaeologists expect to be able to put together the full skeleton one day! In all, the bones of some 500 hominids, have been found at Sterkfontein making it one of the richest sites in the world for early hominids.

To explore the cave  I must join a small tour group led by a local guide. To access the main cave we go down about 60 metres through a small opening that’s been blown into the side of the cave wall in recent years allowing easy access to both visitors and archeologists.

I love caves! Think about it – giant holes within the earth that have been there for thousands or millions of years and hold secrets to our past! They’re a whole other world just waiting deep in the dark to be discovered. At Sterkfontein researchers believe that early humans and animals fell through soft openings in the ground above the cave and then had no way to get out so were entombed– I’m glad they’ve made an easier access route for us!

In spite of the ongoing exploration much of this cave system is still unexplored. Along the main path there are passageways large and small leading off to the left and right. We follow some of them, occasionally having to crouch or crawl to go through openings of 1 metre. I feel sorry for the 2+ metre guy in our little group of visitors!

Our guide stops to point out an underground lake.  He recounts a story from 1984 of three local African “explorers” who set off in scuba gear to try and determine the depth and size of this lake.

Each diver attached himself to a tether line at the starting point, ensuring he could find his way back at the end of the explore. However, one of the divesrs went a bit too far and his tether line snapped. To make matters worse his headlamp failed – not a good thing when the area you’re exploring is 60 metres under solid limestone and you’re underwater about as far from your starting point as you could be.  Not surprising, when the two companions got back to the start they discovered they were alone except for the broken tether of their companion. They set out looking for him but to no avail. They contacted emergency services on the surface and requested assistance. They were told that it was now evening and too dark for anyone to begin a search. It was too dark? They were in a cave! The irony was clearly lost on the emergency workers who refused to come until the next morning.

Divers continued looking for the man night and day. They finally found his body 29 days later. He had managed to find a ledge with a small pocket of air where he had crawled when the oxygen in his tank had run out. That’s where he died.  It’s believed that he died just hours before rescuers would have found him. As a result of this tragedy diving is no longer allowed in the cave so the depth and breadth of the lake remain unknown.

Seeing 3+ million year old fossils that are easily recognized as coming from our ancestors was very cool. I’m reminded that Charles Darwin predicted in the 19th Century that the origins of humankind would be traced back to Africa because that’s where the great apes live.  Standing here at Sterkfontein it’s not hard to believe him.

From the caves we head back to Jo’burg for an afternoon exploring local street art. I was excited to meet up with the local artist who would be showing me some of the street art highlights of the city. We started with a history lesson.

Street art and graffiti as acceptable art forms are actually rather new phenomenon in South Africa; it’s really only been in the last 5 years that graffiti “tagging” (painting your name on a wall) has begun to develop into larger pieces of art on public walls. Although large, colourful tags are still very much part of the street art scene here my interest lies in murals and paintings.

“Falko One”, a street artist originally from a small town in a violent and dangerous neighbourhood near Cape Town has been painting for over 25 years. He’s also widely regarded as an integral part of the foundation and development of the South African graffiti scene. He began his career in graphic design but soon left that field to pursue his street art. Falko One often paints brightly coloured and unusual images of elephants. Indicative of his prominence and respect in South Africa Falko One was selected to paint the backdrop for the celebration of Nelson Mandela’s 79th Birthday party!

In addition to Falko One, the female street artist “Fin” is also quite prolific around Jo’burg. Her realistic animals and distinctive female characters are highly recongnizable.

Beyond these two local artists, Jo’burg is starting to see works by a number of internationally known street artists gracing their city walls.   I was fortunate to be able to find work by both ROA – a Belgian artist and one of my favourites – and American street artist Shepherd Fairey (famous for his stencils of Andre the Giant and Obey) without having to look too hard.

Although the breadth of street art in Jo’burg may not be as great as I’ve seen in other cities around the world but the culture is booming! There is an increasing number of street art festivals that help new artists get recognized and, according to my guide, the city of Jo’burg is starting to recognize the aesthetic value of covering the sides of old buildings in sometimes questionable neighbourhoods with colour murals. These murals tell stories, depict social messages or make political statements: they make an area look better and the people who live and work in the area feel better. 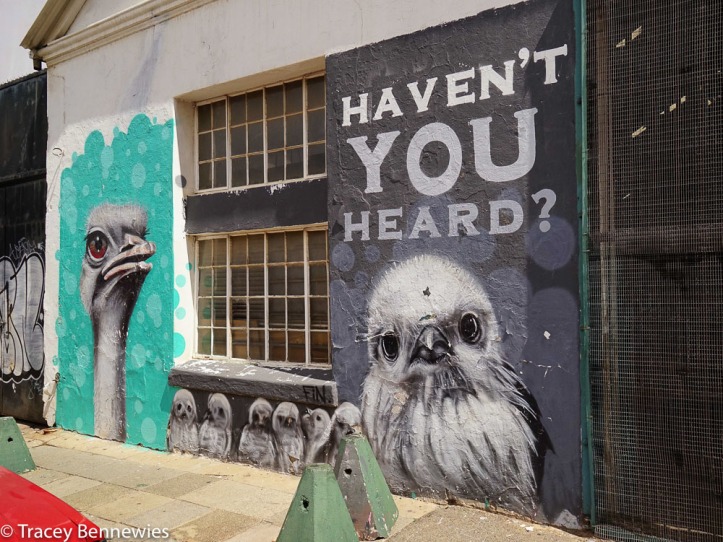 At the end of another interesting day I return to the hotel with fossils, the development of man, caves and street art on my mind. Sitting and sipping my champagne I’m struck by the similarity between the earliest cave paintings and modern day street art.  The stories of our lives painted/etched on walls for others to see.   I wonder what humans in another 3+ million years will make of the artwork we’ve left for them on the sides of our walls? 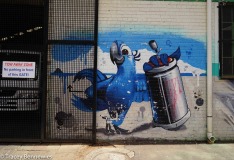 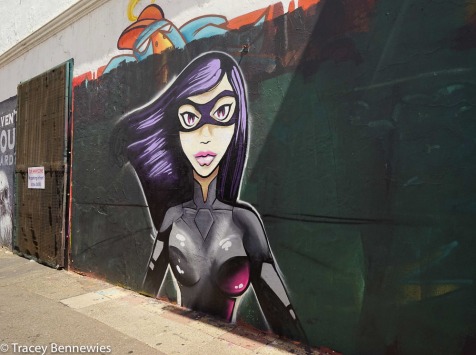 This is the “sign-in” wall for visiting street artist to Johannesburg. 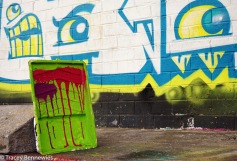 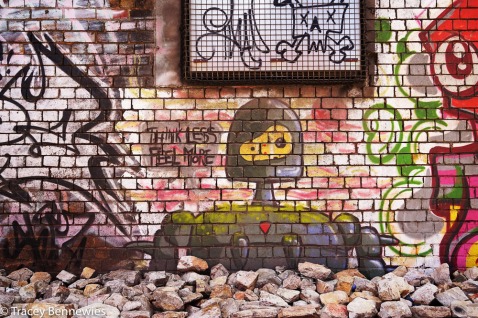