The Sounds and The Silence

Since the terrorist attacks in Paris last Friday much has been written and shared by thousands, if not millions: Experts, witnesses, victims, observers, journalists, commentators, politicians, everyone and anyone with a story to tell, an opinion to voice or information to communicate has done so, somehow. I will add my voice to the mix because I too have a story to tell about that night.

For me, the events of the last few days in Paris will be forever indexed by the sounds: The sounds of phones pinging; the sounds of sirens; the sound of silence.

I was attending an Ex-pat gathering on Friday night in an area of the city about a 20-minute cab ride from our apartment. There were 14 of us there – Canadians, Americans, Kenyan, British and French. Gathered together around a table for a night of tasting Italian and French wines.   I had been looking forward to this night all week, both for the wines and the social interaction. We had left our phones in another room, none of us expecting that anything important would happen during the brief time we would be together. However, at some point over the course of the evening I realized that my phone, while in my purse in another room, had not been turned off. I could hear the sound of texts arriving, but thought nothing of it.   I was enjoying lively conversation and good wine. I could imagine no reason why someone would need to get hold of me. But then my phone rang, not once but twice. A red flag went up and I rushed to see who had called, assuming that something had happened back in Canada. I had, in fact, missed two phone calls, but the real surprise was that there was a long list of text messages from numerous people, each asking the same question: “are you okay?” We all know what came next.

Together with our new friends we spent the next few hours glued to the television set.  We comforted each other and responded to texts from family and friends concerned about our safety.  We also contemplated our options for getting to our respective apartments in light of the extenuating circumstances: Uber had cancelled all cars, taxis were busy ferrying victims home (for free), a number of the Metro lines had been shut down, streets had been cordoned off, suspects were still at large and few understood either what was happening or when it would stop. We considered walking but for us it would have meant a good hour out on the streets walking directly towards the area everyone had now been warned to stay away from. Should we try and spend the night at our host’s apartment? No one really knew what to do but everyone wanted to be in his/her own bed, where we would be safe in our cocoon.

A few hours later, after much discussion, contemplation and searching on-line we managed to secure three taxis. We split into groups and we parted, hugs all around as we set off to make our way home. The streets were empty, dark and silent, so unusual for a Friday night in Paris. Except for the sound of sirens. The sirens pierced the silence.  Again and again.  Since most of the attacks had occurred within a 15-20 minute walk from our apartment, and we live on a main thoroughfare right around the corner from a large police station, we are used to hearing sirens. But that night they never seemed to stop. I finally went to bed sometime after 3am, closing the door to our bedroom and putting in earplugs to try and block out the sound of the sirens that just wouldn’t end.

Saturday, by contrast, was punctuated by the sound of silence. There was no traffic on our street: no horns blaring or engines revving. The sirens had stopped.  There was no sound of chatter, talking or laughter since there was no one walking on the street or gathered around the bus stop in front of our building.   We did what the President asked. We stayed inside.

By Sunday some of the regular sounds of life returned, muted, but there. The day dawned bright and warm, a temptation that is difficult for any Parisian to resist, particularly in the middle of November. I was motivated to go for a run that morning and was surprised by how relieved I felt to see a little bit of traffic on the street and a number of other people running along the Seine. I guess we all just needed to get out.  However, although I heard the sound of engines and the clatter of a few trucks on our busy street, for the most part the horns stayed quiet. Nobody honked.  People were patient.  And there were no sirens.

Walking around the city later that afternoon I was again relieved to see people sitting in cafés, children playing in parks, dogs being walked.   The people were emerging from the cocoon of their homes, but their sounds were still muted, quiet, more like whispers or a low hum than the normal raucous laughter and banter I’ve grown used to on a warm weekend afternoon.

Sunday evening, while I was making dinner, the sirens started again. My heart and stomach sank as – dinner forgotten – I rushed to our balcony. The sirens were accompanied by over 20 vehicles. The few people that were out on the street below stopped, frozen, not knowing either if or where they should run.  Afterwards, I again sat glued to the television. A short time later the news reports said it had been a false alarm. It took a lot longer for my heart and stomach to return to normal. Dinner was late.

Monday, the start of the workweek and, while quieter than usual, bore more of the sounds of normalcy: busses, garbage trucks, motorcycles and the occasional honk of a horn. People were out and about, the homeless guy who “lives” beside our building was back and I thought to myself that life was slowly returning to our street. With these sounds as motivation I decided to walk over to Place de la République to pay my respects to those who had died or been injured, to show my support for their friends and family, and to join the movement of defiance spreading around the world to tell the perpetrators of these attacks that we will not allow them to instill fear in us or keep us from our daily lives. Arriving at Place de la République I was moved beyond words by the scene in front of me: hundreds of people standing together. Joining them I was most moved by the deafening sound of the silence. So many people in one spot, yet so much silence punctuated only by soft crying, murmured conversation and the occasional television interview taking place.

Later that evening, following my Creative Writing class, I returned to Place de la République.  I visited the Bataclan nightclub as well, the site of the most significant and violent attack, now cordoned off and heavily guarded. I saw the same scenes and heard the same silence. This time however, it was punctuated by the sound of guitars and singing, a musical balm to soothe the sadness with messages of hope.  The flicker of hundreds of candles added a silent but luminous buffer to this message.

Life is returning to “normal” now, people are going back to the cafés they love so dearly and the “busyness” has returned to our street.  People are even honking at each other again, though I’m optimistic enough to believe that it’s less frequently than before.  We, as a global community, have all been affected by the attacks here in Paris.  It doesn’t matter where you live or whether or not you even know anyone here.  And we will each have our own way to mark the events we have experienced. My way will be by the sounds that I heard. Standing in Place de la République I had a conversation with a friend who lives further from the centre, on the edge of Paris. She said that, for her, the events are marked by the lights: the brightness of the city before the attacks, the darkening of the Eiffel Tower immediately afterwards, its recent re-lightening and now, the hundreds of candles flickering around us. It makes sense, for her but for me it will be in the sounds and the silence. These memories will be with me for a long time, of that I have no doubt.

Following are a few of the photos I took on Monday.  I must admit that I was very unmotivated to show the faces of others paying their respects or mourning their loved ones.  To me that feels far too personal to be spread across the media.

The scene at the Bataclan Nightclub.

The scene of the carnage is guarded by police. While I was there sounds of street cleaning were coming from behind the tarps. It was very disquieting.

Calm dialogue, the sharing of ideas….the keys to understanding. 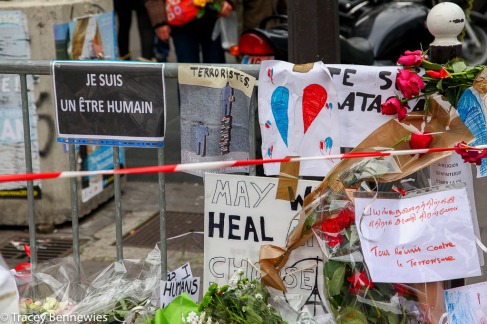 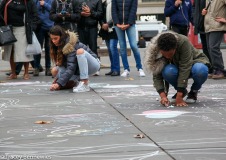 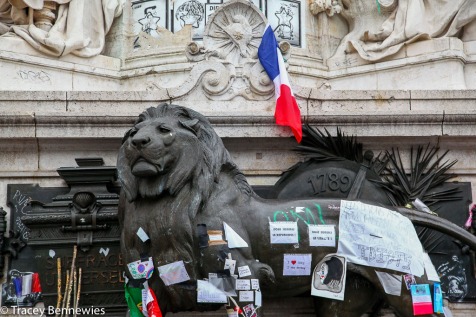 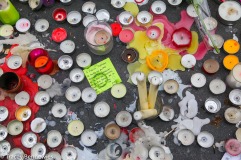 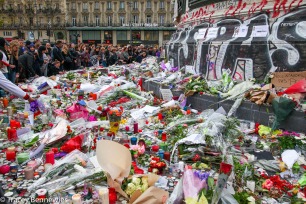 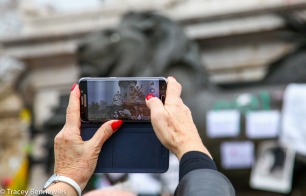 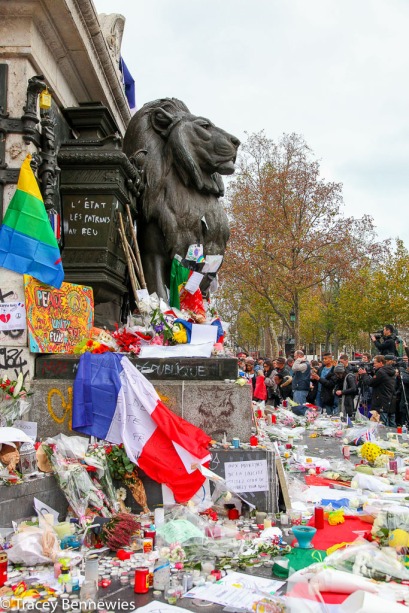 Pages from Charlie Hedbo still line the base of the statue of Marianne at Place de la Reépublique. 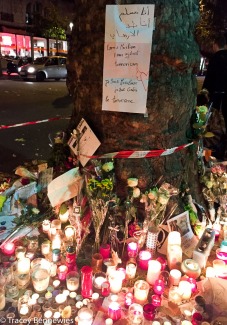 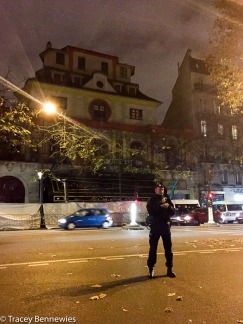 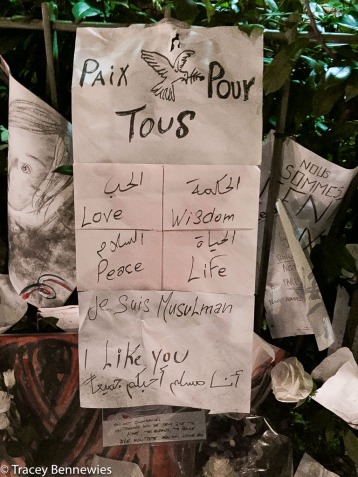