If I’ve learned anything in my brief three months here in Paris – besides not to take “Non” for an answer from either waiters or store clerks – it’s that this city is full of surprises: surprises around corners, surprises in doorways, surprises down alleys and passageways. It’s a little like jumping down the rabbit hole every time I go for a walk and decide to take a different route – I never know where I’ll pop out.  Which leads me to the topic of the destination of our Creative Writing group this week – the Jardin du Palais Royal. Of course I’d heard of the Palais Royal but I wasn’t quite sure what it was – besides a “Royal Palace” – nor had I ever been there or known that it has a “Jardin” (garden)! What I did know is that it’s about a mile from our apartment, an easy walk even on a cold day. Off I went, map in hand.

On the way I was trying to imagine where exactly there could be a garden apparently three city blocks long and one city block wide so close to the Louvre in an area densely packed with old buildings and narrow roads. And, more baffling still, how could I have missed it in all my walking and exploring in that area? These musings brought me basically to the location where my map told me the Palais Royal should be. I saw nothing. Recalling my theory about Paris streets and rabbit holes.  I slowed my pace and began poking my head into open doors and down alleyways. I noticed a security guard of some sort making a half-hearted effort to monitor the comings and goings at a nearby doorway. Ah-ha! I strode confidently passed him and through the doorway – the French get to do a lot of things simply by acting confident and doing them. With a gasp, I pulled up short just inside the doorway. I found myself in the middle of a beautiful garden, surrounded by a large colonnade, a fountain, statues and a large number of those ubiquitous green metal chairs.

I can’t go further without offering up a little bit of history: the Palais Royal was originally called the “Palais-Cardinal” because it was completed in 1639 as a home for Cardinal Richelieu, the Minister to Louis XIII. When Richelieu died the Palais became part of the King’s property and it’s been called the “Palais Royal” ever since. The Palais passed from Louis XIII to Louis XIV.  When Louis XIV died his great grandson, Louis XV, became King.  The problem was that Louis XV was only 5 years old at the time and was told to live at the Tuileries Palace by his uncle and Regent, Louis-Philippe, the Duke of Orleans. From here on out the Palais Royal stayed more or less in the Orleans family.   Around 1785, more than 100 years after it was built, the Palais Royal reached the hands of Louis-Philippe II d’Orleans (the great grandson of the Regent Louis-Philippe AND the cousin of King Louis XVI) and his wealthy wife.  Stay with me now because THIS is where the real fun begins.

Louis–Philipe II, by marrying well, had become one of the wealthiest men in France however he liked to live large and well.  As the saying goes, money that comes easily often has wings. After about ten years, when Louis-Philipe had spent most of his wife’s money, he needed a new source of income. In a stroke of creativity he figured that he could earn good money if he was able to rent out part of the palace grounds. To this end he had a colonnade built around the gardens at the Palais Royal with retail stores below and apartments above. He rented out all of these buildings.

Now, in truth, many of the apartments ended up being brothels, prostitutes’ apartments or gambling dens. The stores below held retail establishments as well as so-called ‘amusements’ such as shadow theatres, trinket shops and cafés.   Learning this, it may not surprise you to learn that Madam Tussaud and her famous wax museum also got its start in the colonnade of the Palais Royal. The palace complex was an important marketplace in Paris not only for the aristocracy, but for the middle and lower classes as well.   It was known as an area for free speech and debate, good parties, debauchery and gambling – free from the eyes of the police who were forbidden to enter onto “private” property. 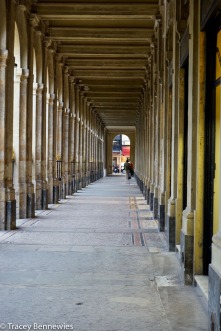 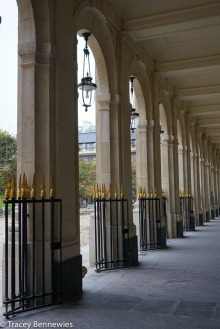 Perhaps the most famous event to take place in the Jardin du Palais Royal occurred in July, 1789 when Camille Desmoulins jumped on a table at one of the cafés and incited the crowd to the frenetic state that started the ball rolling towards the storming of the Bastille a few days later and, hence, the French Revolution!  In an ironic twist the Palais Royal was almost burned to the ground by mobs a few years later.  The fire destroyed one of the two theatres on the grounds.  The colonnade and apartments surrounding the garden were, however, left intact.  Today, the oldest surviving structures are at the northern end of the Jardin (opposite the Place de Valois for those of you who know Paris). 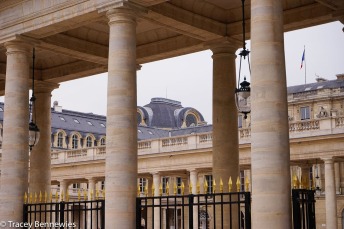 While the history of the Palais Royal and its Jardin is long and varied, the real wonder to me is that it is still here, still hidden from plain view and still operating in much the same way it always has: Sophisticated designer stores now occupy the lower levels of the colonnade while there are apartments to rent above. The brothels and gambling dens are however, long gone. The Palais itself houses the Conseil d’État, the Constitutional Council and the Ministry of Culture. Access to the Jardin du Palais Royal continues to be through small doorways that exit at four different spots on to small side streets.  It’s no wonder so many tourists miss the Jardin completely – you have to be willing to go down a rabbit hole to find it!