I’ve started taking a creative writing course as a way of pushing myself in another direction.  Writing has always interested me and I’m definitely a harsh editor (just ask the BCO) so it’s nice to have someone commenting and editing my work for a change.  I’ll post my creations here each week for any one you who may like to read them.

Paris, like any great city, is a mélange of the beautiful and the mundane. On a daily basis you can pass something so breathtaking it never fails to stop you in your tracks for a moment or two. At the same time, there are places you hurry by dozens of times a week without ever really noticing them: the ones that are simply on the way from “here” to “there”.   Imagine my surprise when it was at one of those places our creative writing group was going to meet for the first time.

The instructor’s e-mail said simply to meet at Le Sully Brasserie, 6 Blvd Henri IV.   According to Google we would be meeting on the south-eastern edge of the Marais, south of Bastille, on a major thoroughfare in an area of no real significance. According to me upon arriving, the area did seem rather non-descript; a disparate collection of architecture, a very modern statue of someone I didn’t immediately recognize, a pile of ruins in the corner of a park across the street, a major road, Le Sully with it’s bright orange awning and not much else.

In fact, Le Sully, our destination, stands as the lone brasserie within a couple of blocks, unusual for Paris where cafés and brasseries often seem stacked one on the other.

At first glance the décor appears traditional but not particularly noteworthy: brown and orange 1970’s casual meets 1920’s Art Nouveau etched glass.   And yet the result is an atmosphere that is warm and inviting, rather like entering a friend’s home. There are a multitude of booths and tables both larger and more generously spaced out than one usually finds in Paris eateries. It feels as though you can unwind and eat in peace here.

We are introduced to Romain Vidal, the 4th generation owner of Le Sully, who recounts the story of his family’s relationship with this café.

Started by his great grandfather in 1917 as a small Tabac & Café, Romain explains to us how much Le Sully has physically expanded over the years. He comments that this growth can be traced on the floor and he points out the original worn blue and yellow mosaic patterned tiles, as well as those of each successive expansion.   The original pattern is one the family has always liked and respects as part of the Cafe’s history. Therefore, with each expansion they have left the previous tiles in place and continued the pattern anew. Romain laughs when he tells us that the best tile work is still the original; that the tiles from the 2000 expansion are already starting to fail.

In addition to the flooring, Romain points out another feature that has stood the test of time; the wood paneling that graces the walls.   He tells us that he can’t believe these walls were once buried under layers of wallpaper and recounts the amount of work it took to restore them.  The paneling now stands proud and richly refinished. In essence the Café Sully is, and will undoubtedly continue to be, a visual tapestry of the history of the Vidal family. In fact, when I glance over my shoulder I see a photo of the Vidal family hanging low on the wall. The photo is from 1917 and is a small, subtle homage to the great grandfather who left the family farm in southern France to seek his fortune in Paris. It is a reminder of how far the family has come. 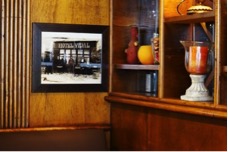 “Now”, Romain declares, “it’s time for wine and food!”. The brasserie specializes in “traditional” French cooking, with a staple of 5 or 6 dishes in addition to

other rotating weekly items. Romain confesses that his favourite dish is the steak tartare, calling it the “house speciality”.   Of course I order it and it’s delicious.

His true passion however, seems to be wine. Romain convinces our group that we will love a particular red from the Langoudoc regions in southern France, a wine he describes effusively as “this is Langoudoc” and refers to as “his baby”. We all agree that he’s not wrong.

Sitting, listening to Romain and sipping my wine I realize that Le Sully is a place that takes a while to grow on you. It is a slow burning ember rather than a roaring fire; one where it takes time to appreciate its’ warmth and beauty. From the windows of our booth, I watch children laughing and climbing over the large pieces of ruins that I now realize are from the Bastille, the former prison not far from here. I love the irony. 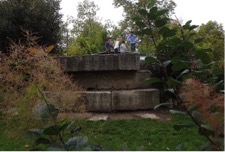 I also remember that the modern statue is of the renowned teenage poet from the 1800’s, Arthur Rimbaud. His friend and lover, Paul Verlaine, called Rimbaud “the man with soles of wind” for his restless soul and his love of travel – many times on foot – and it is this that the statue depicts with Rimbaud in a reclined position resting on his feet, which are in front of him. I notice that he is positioned such that he seems to be watching over the children at play across the street. Whether the positioning was by design or coincidence, it seems fitting.

Leaving Le Sully with thoughts of the evening running through my head I notice some tarpaulin and scaffolding on the other side of the river encapsulating a mansion from the 1600’s. The building is clearly in the throes of being repurposed for a new life in 2015.   I can’t help but wonder if they’ll be keeping the floor tiles.