Once you’ve covered the “Top 15-20” attractions in Paris it’s time to start looking deeper for interesting and unusual places to see. One of the places to pop up on any list like that is the “Cimetière des chiens” (the cemetery for dogs) – ah, except it’s not actually just for dogs, it’s really a pet cemetery and houses the remains of dogs, cats, birds, rabbits and even a couple of horses.  It’s an unusual spot that requires significant effort to get to: 2 subway rides and a good walk (total time: about 50 mins from our place). 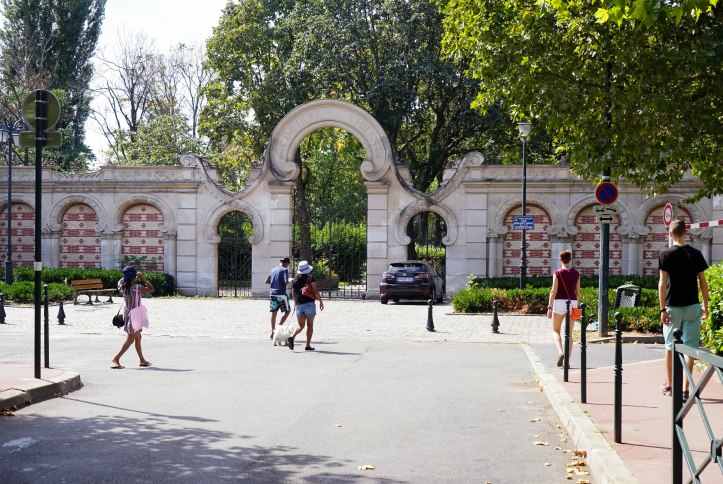 Most of you who know me will realize that I’m not really much of a pet person so you might be wondering why I would possibly be interested in visiting a pet cemetery? Well, you’ll also realize that I love weird and unusual places and, honestly, this place sounded both weird and unusual.  Also, I can certainly appreciate a person’s loving affection for their pet.  On one of my high empathy days I may also be convinced to appreciate an owner’s desire to treat his/her pet really well….even in death.  Which all explains why, on a hot Sunday afternoon, with Gary, members of the BCO as well as a 20-something visitor from Belgium sitting around looking for something to do I announced that we should visit the Cimetière des chiens.

First a little bit about the Cimetière des chiens. For starters, as I said, it’s not easy to get to. Located in the north-west of Paris, this is not a place that you’re just going to stumble upon: you have to know where it is and then make an effort to get there. It’s located in a lovely spot though – perched on the left bank of the Seine River north of the Bois de Bologne park. While the cemetery and the surrounding area seem to have fallen into some disrepair over the years, it’s still lovely and you can well imagine how beautiful and peaceful it would have been in years past.

Opened to the public in 1899 the Cimetière des chiens is thought to be the first of its kind. The cemetery was founded by a French actress turned social/political activist named Margaret Durand.   She was a colourful and eccentric character who famously had a pet lion she named “Tiger” whom she used to walk through the Parc Monceau, frequented by aristocrats and courtesans.

Durand’s motivation for creating the cemetery was a concern for public health. For centuries Parisians had been disposing of their deceased pets at the side of the road, in dumpsters or by throwing their bodies into the Seine. Gross right? The pet cemetery was Durand’s attempt to offer Parisians an alternative to these practices, as well as to encourage the proper burial of domestic animals. Her pet lion (clearly a normal “domestic animal”) was the first resident of the cemetery although his grave is unmarked on the map and, on that first visit, we were unable to locate it.

The cemetery is generally organized by animal types as well as by “themes”. You have most of your dogs together – kept separate from the cats for obvious reasons.  The rabbits, birds, horses and other pets tend to be somewhat scattered about, while animals who belonged to armies, as well as service dogs have their own areas as well.  I should note that there is also a cat house in the cemetery where any number of living cats currently reside.  Unfortunately it wasn’t open on the day we visited (gosh darn).

Perhaps the most famous “resident” of the cemetery is Rin Tin Tin, the dog of TV fame during the 1920’s. Rin Tin Tin starred in about 20 Warner Brothers’ films and died in 1932 at the age of 14.

Right around the corner from Rin Tin Tin lies the grave of Napoleon I’s dog “Moustache”, mascot to the Grand Armée.

Moustache died during the Spanish campaign of 1811.   I’m curious why Moustache’s body did not make it into eternal rest at Les Invalides (in the heart of Paris) along with Napoleon I and his horse, “Marengo”. Evan’s theory is that the horse was more valuable in war than the dog, but that seems odd to me given that his final dog, from when he was exiled on the Island of Elba is, in fact, stuffed and on display at Les Invalides and that dog wasn’t ever near a war!

The monument that greets visitors at the entrance to the cemetery is for ‘Barry’, a St Bernard who lived and worked at a hospice high in the mountains of Switzerland at the start of the 19th century.  Barry is credited with saving the lives of 40 people.  The legend goes that it was the 41st person that killed him, a tragic but lovely tale.  However, according to Wikipedia as well as a number of other sources I checked, Barry actually retired and past away less gloriously. But, if you’re into the even more unusual, Barry’s skin has actually been taxidermied (?) and is on display at the Natural History Museum in Bern, Switzerland.  (Now I can’t wait to make a special trip there myself to see Barry “in the flesh”!).

But perhaps the more poignant gravesites within this cemetery are those of the pets from the “regular” people. Granted, the Parisians who could/can afford to have their pets immortalized here are undoubtedly of a certain economic status, it is still touching to see the tributes these people create for their pets (yes, even I found some of them touching).  At the same time, it’s also hard not to giggle or even guffaw over some of the ostentatious or crazy displays – they make me want to meet both the owners and their pets! 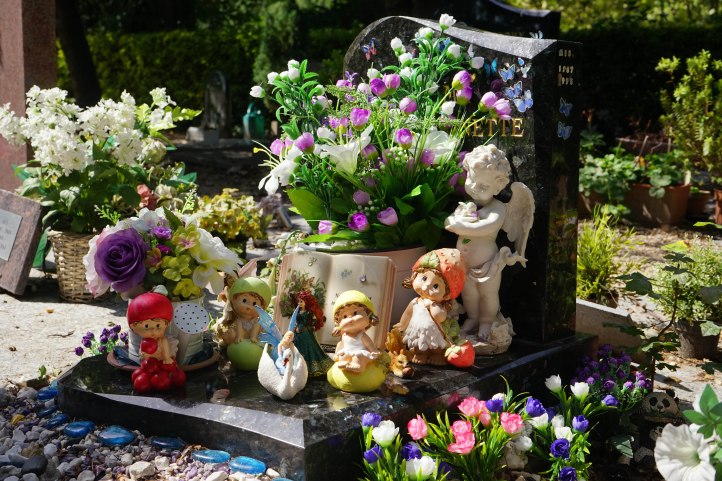 Although we weren’t able to find the grave or her lion, Margaret Durand’s (the founder of the cemetery) other common “domestic animal” pet – her horse – is immortalized in a simple headstone (I’ll go on a hunt for her tiger’s gravesite another day):

Now I’m not sure if I find the Cimetière des Chiens heart-warming, sad, creepy, hilarious or just self-indulgent. Perhaps a little of each. It’s heart-warming to see just how much pets mean to some people.  At the same time, I find it a little sad that, in some cases, one gets the sense that these pets may have replaced human contact, as seems to have been the case for the clearly distressed owner of “Dick”:

How can you not feel sad for the loneliness this person feels at the loss of her dog? cat? rabbit?  who knows….but it’s sad.

And what about the despair of the owner of this pet, poor Ching Ling Foo (one of our favourite gravesites for no other reason than the name is awesome):

As you may have gathered by now, I quite enjoyed our visit to the Cimetière des Chiens and I plan to return.  It’s a unique and thought provoking spot, a lovely place to while away an hour or two.  Given the current world situation with respect to refugees I could also argue that the entire place is over the top, self-indulgent and a blatant example of how much more some people think about their pets than they seem to think about the plight of others – but that’s an argument for another day.  This was just a fun visit to a not often explored area of Paris.

Let me end this post with a few more photos of some of my fave gravesites.