Hurray for the Weekend!

After a few weeks in the city Gary and I decided to do what urban dwellers the world over often do on weekends – leave.   With the promise of nice, hot summer weather we decided to head for the small town of Honfleur on the upper Normandy Coast. It’s about a 2-hour drive from Paris and was at the top of a list of “Must Do” weekend jaunts a colleague had given to Gary.

After spending a pleasant coffee hour with Google I learned that Honfleur has been around since about 1027. Situated at the mouth of the large and important Seine River that flows through Paris, by the 1200’s Honfleur had become a busy port for product flows between Rouen and England. During the Hundred Years War Honfleur benefited from its strategic position: it’s defences were fortified to protect it’s estuary from attacks from the English. However, after a hundred years of effort, in 1357 the English finally took Honfleur from the French and managed to hold onto it for almost another hundred years. When the French finally got their town back they would use Honfleur as a base to attack and ransack villages on the English coast, including destroying the town of Sandwich – tit for tat I’d say.

For us, the most interested part of Honfleur’s history is its relationship with Canada. After 1608 (when the French and the British had finally given up squabbling for control of Honfleur), the town thrived on its trade relationship with Canada. In addition, Samuel de Champlain, explorer and fondly remembered as “The Father of New France”. set sail from Honfleur and landed in Quebec.   Vive la France!

Today, Honfleur is a bustling port town across the river from Le Havre, which has taken over the role of ‘main’ coastal port. It is pretty and medieval with narrow winding cobblestone streets, large parks and miles of beach along the coast of the English Channel.  It also has the oldest and largest wooden church in France. 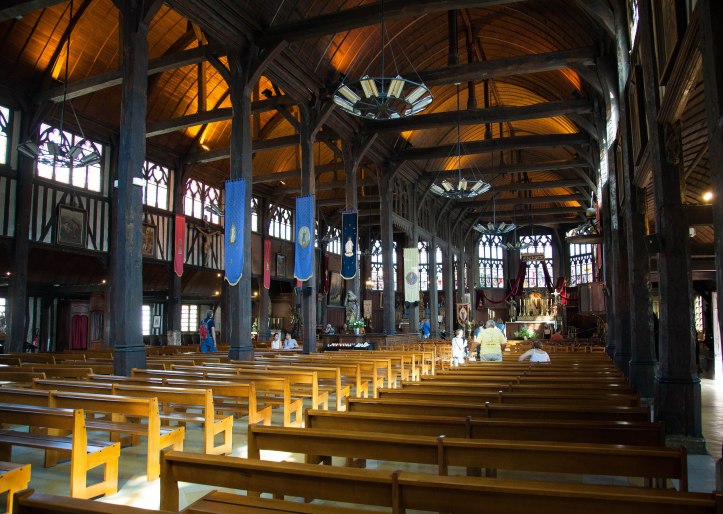 Over the years, Honfleur has become a mecca for artists who flock to its lovely port and quaint streetscaps and, as a result, it is loaded with art galleries.

All in all Honfleur was a perfect weekend destination for us.

Getting out of Paris was surprisingly easy. We rented a car from a location on the “Péripherique” or “perimeter highway” that we could reach with just one subway ride. From there, we were quickly away from all city traffic and cruising through the rolling farmland to the west of Paris. Gary was thrilled. Not only was it his birthday weekend but he was also driving a car for the first time in over a month. Now, before you ask, no, he didn’t rent us an Audi. That was his call, not mine. I told him that he should rent one, as a birthday gift to himself. He settled for a brand new VW Golf, another well made German car by Audis’ corporate owner.   Whatever. He was happy and so was I.

Our hotel was in the middle of town on a narrow cobblestoned street. We had a top floor (aka attic) room that was much bigger and nicer than I’d anticipated, although I wouldn’t want to try and manage the skinny narrow staircase up after too many glasses of wine! But it was quiet, large and comfortable – not to mention had that Hitchcock-ian view of thousands of birds making their nightly descent to the rooftops and chimneys around us.

The small inland harbour is a wonderful place to take photos. Just after dawn Saturday morning I was wandering around, caught up in the reflections of the boats and buildings the results of which you can see in my gallery titled “Reflections of Honfleur”. Tall colourful houses reflected perfectly off the water. 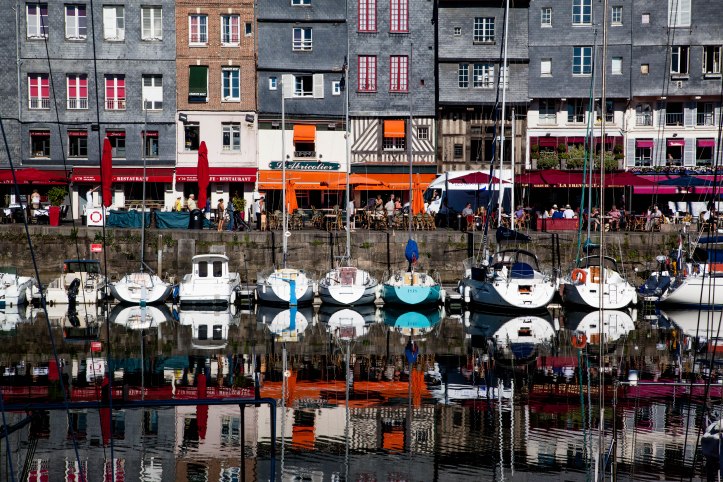 Although there weren’t many people up and about around the harbour at this early hour, the main square was bustling as farmers, boulangers, chefs, cheesemakers and others worked to set up their stalls for the large, and very delicious Sat market. Down at the waterfront the fishermen were doing the same thing. The market was a menagerie of smells and tastes – everything from Paella to coffee to a new bra to fresh vegetables and oysters was available in one or more stalls scattered throughout the town. And this happens every Saturday. It was a sensory delight just to wander about that morning. 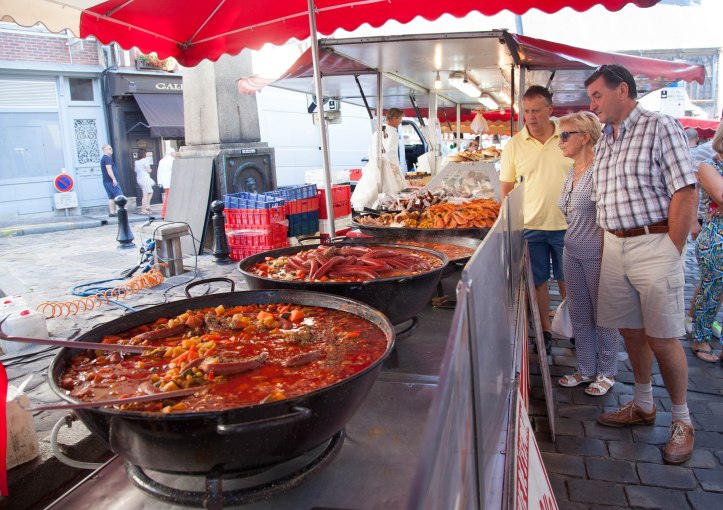 We decided to do the main “touristy” thing in town which is to take one of the many boat tours out to see the “Pont de Normandy” (the Normandy Bridge). This bridge is 2,143 metres long and, at the time it opened in 1995 it was the longest cable-stayed bridge in the world. While this may no longer be the case, it is still an incredibly impressive structure, especially when approached from underneath. 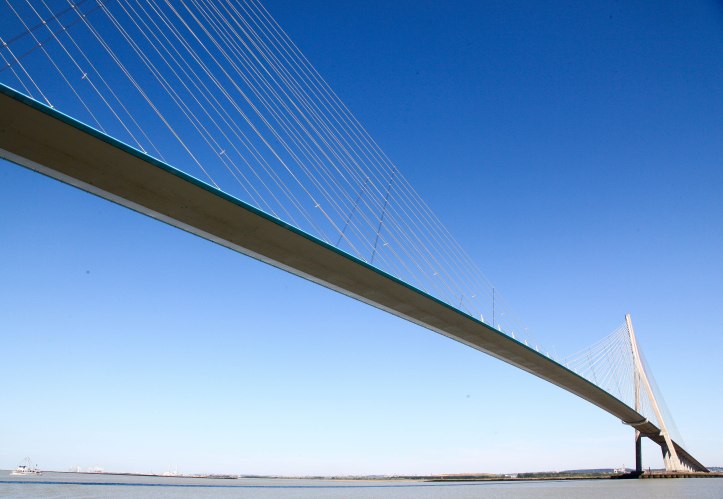 As well as seeing the bridge, the boat tour gave us a closer look at the port of Le Havre and the extensive beach coast of Normandy – where we spent the remainder of the really hot day.

All of our meals for the weekend were strong in seafood and low in everything else. From oysters, to bass, sea bream, mussels, and fish and chips we ate well and hearty from the sea. Our search for wine was not, however, quite as successful.

Honfleur is known for its cider and its Calvados (an apple brandy). Both of these products seem to have displaced wine in virtually every food/beverage store in town – from the smallest Tabac to the larger specialty stores. On our way back from the beach – sandy sweaty and tired – we decided a nice cold bottle of Chablis was called for. We would find one and take it back to our room as an aperitif before heading out for dinner. Google informed me that there were a number of places selling wine “relatively close to me”. Ha….Google had been fooled by the marketers of cider and Calvados. There were no such stores. We followed various sets of Google directions up and down the winding streets leaving a trail of sand behind us looking for somewhere we could get a bottle of wine. After about 25 minutes, with annoyance and frustration factors rising steadily and threatening to interrupt the marital harmony of the weekend, I gave up and went into the closest shop – which happened to be a ladies clothes store – to ask someone non-Google for assistance. Thankfully, the lady shopkeeper gave us directions to the 1…yes, the 1 and only….specialty wine store in town. Within 10 minutes we were standing in front of a little wine shop. We also realized that we were only 5 minutes from our hotel! Oh Mon Dieu, if only we’d walked in the “other” direction from the get-go.

We bought our Chablis. The mistake was – it wasn’t cold. I think, we were so happy to have finally found the store that it didn’t even cross our minds that the wine was warm. I asked Siri (my go-to friend after Google) what to do about this and she suggested a nearby supermarket might sell ice. Off I went, looking for ice.

Well, Murphy’s Law is a funny thing. I got to the supermarket – also quite close to our hotel btw – and, in the entire store they had one block of bagged ice for sale. Yes, a large block of ice. Yes, I bought it. Oh…and I also discovered that they had a full aisle of wine and other alcohol, none of it cold though (of course) so I still would have needed the ice.

To bring this story to a close, I smashed the block of ice on the road breaking it into a million ice cubes. We drank our now cold wine, ate a few leftovers and fell asleep watching re-runs of ‘Raising Hope’ that I’d found on the t.v..   So much for going out.

We will definitely return to Honfleur for another weekend. It’s nearby and it’s lovely.   I’d also highly recommend it for anyone travelling along the Normandy coast. However, you may want to consider bringing wine and a cooler with you. 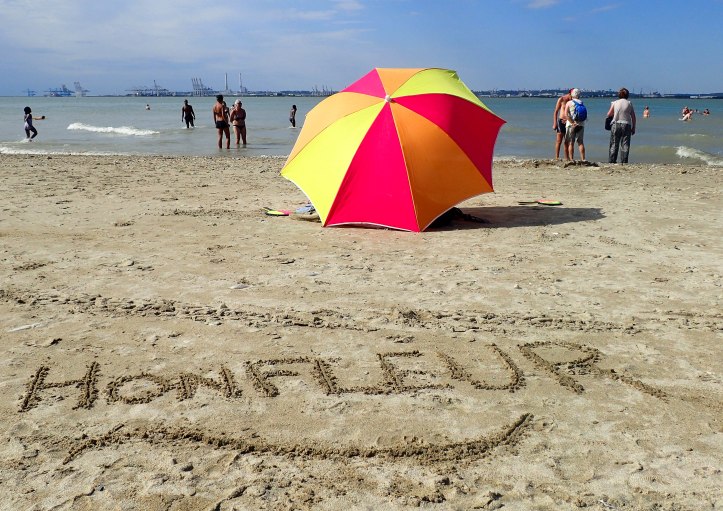